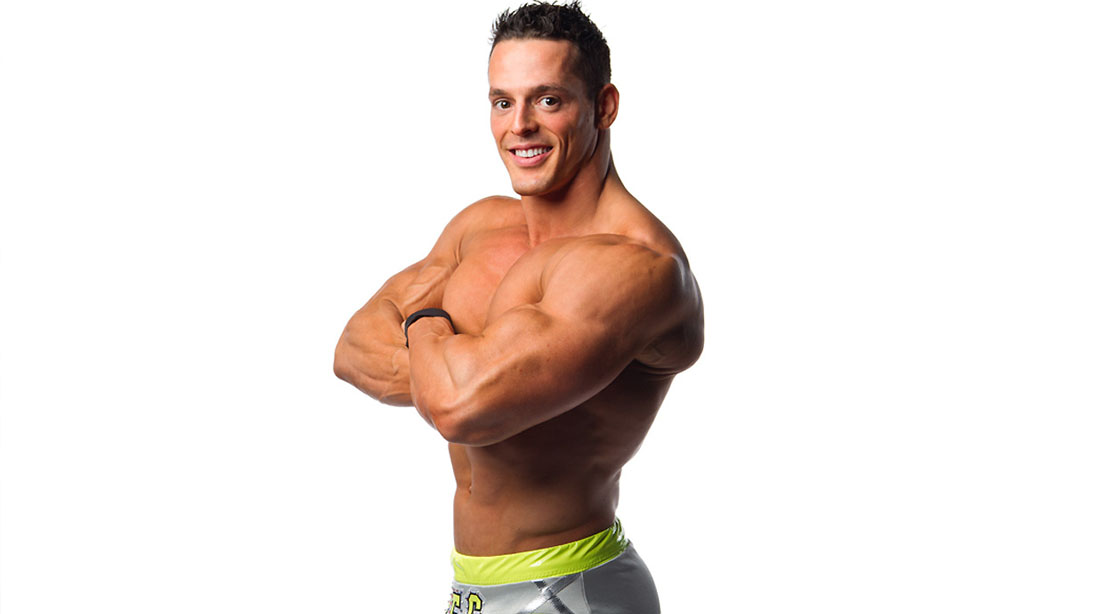 The hilarious and sometimes excruciating “WHACKED OUT” franchise has been highlighting epic fails and massive mishaps since 2006, spawning spinoffs such as “Monster Knockout” and “Sports Crash,” and is set to make a big return to TV screens next year with pro wrestler, Jessie Godderz in the hosting role.

M&F caught up with the multi-talented star who weighs in at 200 pounds to find out how his training is going, and what crazy antics make him laugh at the gym.

The man they understandably call “Mr PEC-Tacular” first appeared under the spotlight when he became a bodybuilder, soon transitioning as a fulltime pro wrestler and grappling for the likes of Impact Wrestling, Wrestle-1, Lucha Underground, and Ohio Valley Wrestling, where he has currently settled. Along the way, he also found fame as a reoccurring presence on “Big Brother.” There’s no doubt that gaining television experience on CBS would help Godderz to develop his character as well as his body.

“I now hold the record of having more annual appearances on “Big Brother” than any other houseguest in the show’s illustrious history,” he says. “The network and the producers of the show genuinely liked the appearances so much, and they ended up being so successful, that they kept bringing me back to pop a rating. Many of my appearances were among Big Brother’s highest rated episodes of the season!” Indeed, as Godderz profile as an internationally known pro wrestler grew, his BB appearances would later evolve from that of a regular contestant to featured special guest spots, putting him in the middle of team tasks such as “Dunk a Hunk” and “Space PECS” and revealing his chiseled physique at every opportunity… of course!

Jesse Godderz is ‘All Business’ in the gym

“I usually work out around five days per week,” says Godderz. “Each session takes approximately one hour. I try to go in and out without much rest between sets, to keep my heart rate up. I’m pretty much all business in the gym!” These days, Godderz is running the ropes for Ohio Valley Wrestling, a promotion that was once a developmental system for WWE but now stands independently and has a global following thanks to its presence on a variety of platforms including Fite.tv. While wrestling for OVW, the big man has won numerous titles, including the National Heavyweight title, and he doesn’t shy away from giving credit to his trainer and mentor, Al Snow. “I owe most of my success to the WWE legend,” says Godderz. “He is the best of the best. He trained me at OVW and made me into the world-class athlete I am today.”

At age 36, Godderz says he’s feeling better than ever before, and has a renewed sense of purpose in the gym, but perhaps in preparation for his upcoming hosting duties he’s beginning to notice gym failures more frequently.

In both his Big Brother and pro wrestling appearances, Godderz has learned to love the same style of self-depreciating humor that often airs on “WHACKED OUT” and feels that although we enjoy laughing at other people’s failures, we do so in a loving way because everyone loves a trier.

“To join in on the joke is the best type of humor of all,” he laughs. “I see guys in the gym let their egos get the best of them and try to max out on the bench with way too much weight on, and the bar doesn’t move more than an inch off their chest! It’s the same thing on deadlifts: I saw one guy try to lift 495 pounds off the ground recently and the weight didn’t budge…so he literally stood there for what seemed like five minutes to try to move that thing. He put chalk on his hands, but it didn’t work. He then had a buddy hit him on the back to psyche him up and that didn’t work. Undeterred, he put on his headphones with the music blaring so loud that I could hear it 10 feet away. Guess what? That still didn’t work. It was ridiculous. I’m laughing right now just thinking about it. I imagine that ego lifting is the root cause of most gym fails!”

With the return of “WHACKED OUT” due sometime next year, Mr PEC-Tacular is still banging heads in the OVW ring, and even has a comic book bearing his likeness on the way. So, is there anything else on Godderz’s bucket list? “Working again with the seven-time Mr Olympia, Phil Heath,” he shares. FLEX magazine readers will recall images of Heath celebrating inside the ring with Godderz and his tag partner Robbie E (who is now Robert Stone in WWE) back in 2013, when they won Impact tag team championship. “I hope to bring Phil into OVW at some point. He’d make an excellent professional wrestler! He’s an icon in bodybuilding and I know he could become one in wrestling as well. My tag team partner Robbie and I called him our Big Bro, and we still do.”

For more info on Jessie Godderz check out his website here!

Jessie Godderz brings the same fire and intensity to the gym that he displays in the ring, opting to work his chest, shoulders, and triceps in one epic session. Are you up to the challenge?

One PEC-Tacular Tip: Keep your core tight, flexing your abs and contracting your glutes to enable core stabilization. The arm range of motion should be from straight up, over your head, to only down as low as your chin or nose (think 90-degree angle)

One PEC-Tacular Tip: Keep your shoulder socket still. The entire movement should coming from your elbow.

One PEC-Tacular Tip: Use no more than 7.5 pound- or 10-pound dumbbells

One PEC-Tacular Tip: Use no more than 7.5 pound- or 10-pound dumbbells Your hands should be wider than shoulder width apart to allow for a90-degree angle while at top of your reps.

The Toughest Guys in WWE History

In and out of the ring, these guys are seriously alpha.

Prev post
What Happened on <em>House of the Dragon</em>? Here's Our Recap of Episode 9.
Next post
What Does Not Squat Proof Mean?