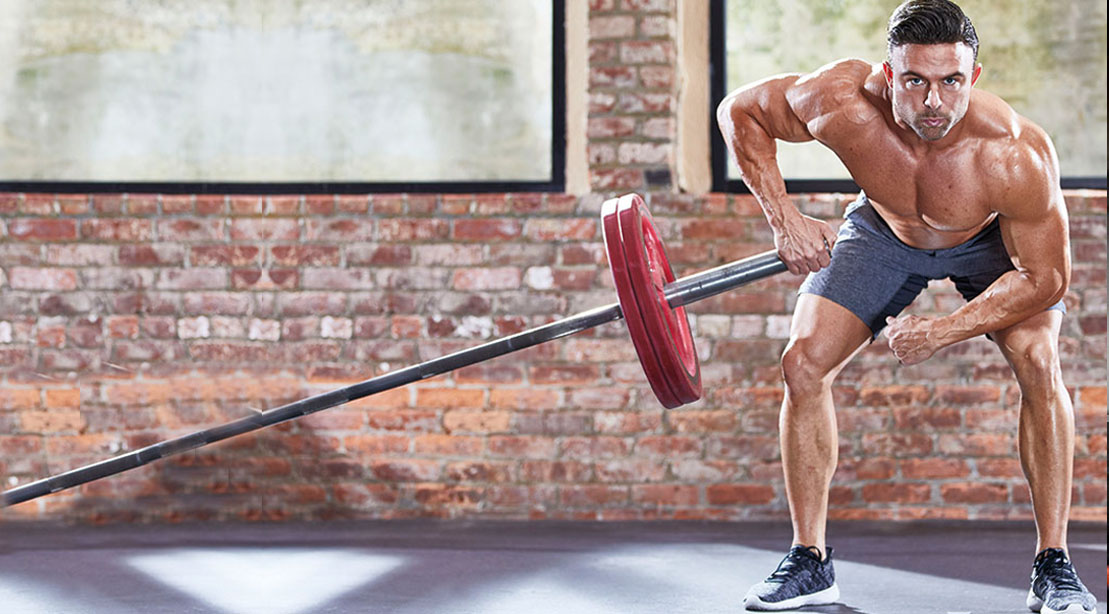 The single-arm row is often thought of as the poor cousin of bilateral rows. Then the Meadows row came along. This row variation allows you to go hard and heavy without being inhibited by big and bulky dumbbells. The late John Meadows, a former IFBB bodybuilder and head coach of Mountain Dog, came up with this great variation, hence the name. The Meadows row uses a landmine set up that hammers the upper back, your grip, and the hard-to-reach lower lats.

The Meadows row is a unilateral row performed with a landmine setup, overhand grip, and staggered stance. The angle of the landmine and gripping the fat end of the barbell reduces shoulder joint stress while maximizing shoulder, upper back, and lat tension. Staggering your stance with a slight incline (because your back hip is up) trains the upper back hard and heavy as well as the lower lats.

This type of landmine row, along with other variations, makes you work harder by forcing you to grip the fat end of the barbell. This improves your shoulder stability because your rotator cuff is engaged. This is a great variation if your shoulders are bothering you.

HOW TO DO THE MEADOWS ROW EXERCISE

The Meadows row is a unilateral exercise performed in a modified hinge position. Because of this, both the lower and the upper body is trained. The Meadows row works these muscles:

Besides the vanity benefits of a V-taper and huge forearms and biceps, there are several other performance benefits of the Meadows row.

Meadows rows are very specific in the way you set up as to target the upper back and lower lats. Here are a few things to watch out for to get the best out of this lift.

Using an incorrect stance: If you set up with a wide, staggered stance, it’s just another single-arm row and not the Meadows row. Set up with a small step back and make sure to elevate the hip closest to the bar to stretch the lower lats.

Using big plates: loading with bigger plates, although macho, will reduce the range of motion. Instead, use 10- and 25-pound plates as the reduced diameter of these plates allow for a great ROM.

Lifting with the wrong muscles: When the weight is too heavy or you’re getting fatigued there is a tendency to shrug your upper traps and not use the upper back and lats. Prevent this by keeping your chest up and shoulders down and lightening the weight if need be.

This exercise is NOT a test of strength, but geared for strengthening imbalances between sides and adding slabs of muscles on your upper back and lats. Here are a couple of programming considerations for the Meadows row.

Learn Why You Should Include the Landmine Press in…

Add strength while reducing wear and tear with this shoulder press alternative.

The major advantage of the landmine is the ability to work around mobility restrictions and to set up in a variety of positions to train the upper back and lats from various angles for better muscle development. Here are a few single-arm rows and landmine variations if the Meadows row is not right for you.