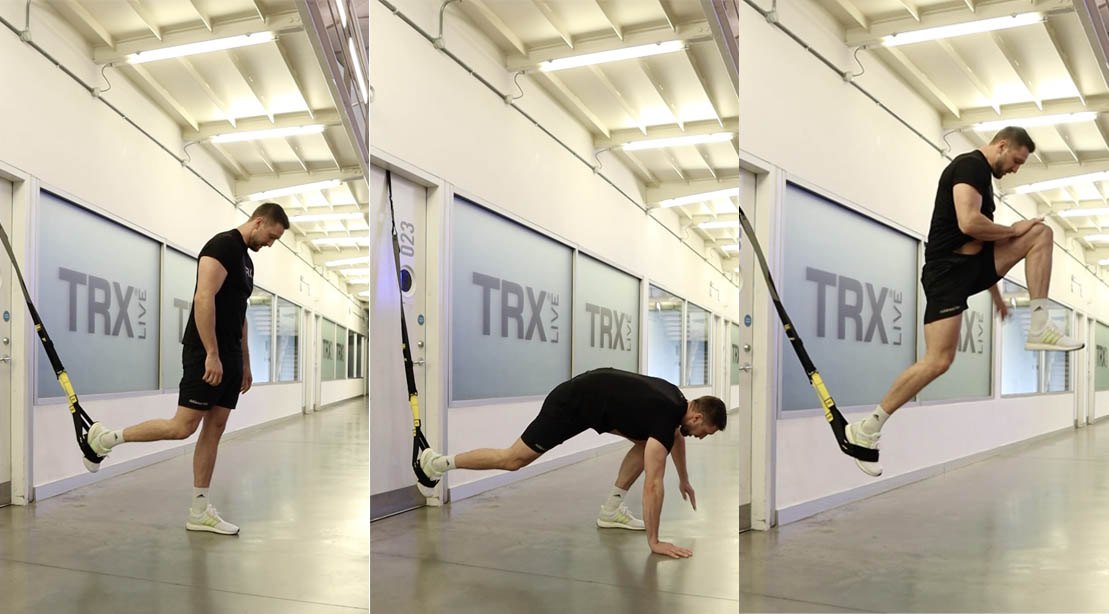 When we asked the folks at TRX to show us the most badass exercise that could be done with one of their legendary suspension trainers. They overdelivered.

You can call it a single exercise if you want, but it’s really a combination of four foundational moves: a pushup, plank, lunge, and jump squat.

And it’s all done on one leg, since your other foot is secured in the TRX strap suspended several feet off the floor.

So, what do you call an exercise like this? You could call it absolutely brutal, but let’s keep its name simple: Introducing the TRX One-Leg Power Burpee.

According to TRX master trainer Jay Brockway, this one exercise pretty much does it all. The one-leg power burpee hits multiple major muscle groups while also working all areas of athleticism and functionality.

“You’ve got everything here,” says Brockway. “Effectively, you’re working the quads, glutes, and core, and you also have a chest press in there. And as soon as you put your foot in the strap, you’ve got the instability factor, so then you’re working on balance, speed, coordination, agility, all of the above. It’s a whole-body phenomenal move.”

How to do the TRX One-Leg Power Burpee

Here’s a video demonstration of the exercise by Brockway:

How to scale the exercise

Needless to say, this is a difficult exercise that not everyone will be able to do with proper form. If it’s too advanced for you at the moment, start with a less-difficult version and work your way up to the full-blown combination.

There are endless ways to modify the movement, says Brockway, starting with the absolute basics and progressing from there. “You can build it from… train the lunge and the plank [separately], and then put them together,” he says. “You obviously need the fundamentals of stability in the lunge, as well as stability in the shoulders to push up and fight gravity. Because as soon as you put a foot in the straps, it’s game over.”

Below are some possible progressions, from easiest to hardest. Start with the most challenging version you’re currently able to do and work up from there.

Brockway recommends using this exercise as a finishing move in a lower-body workout incorporating traditional double-leg squatting and lunging movements earlier in the session. It also works well at the end of a full-body workout.

There are a few different methods Brockway suggests for doing the exercise: traditional sets and reps, high-intensity intervals, and Tabata-style protocol.

The prescription here is 3 sets of 7 reps per leg. “So, do seven reps on one leg, rest a bit, and then do seven on the other leg, and go back and forth,” says Brockway.

This protocol is 20 seconds on, 10 seconds off, for 3 sets on one leg, then repeat on the other leg. During the 10-second rest period, keep your foot strapped in, standing upright on the working leg; there’s not enough time to unhook and then get back in.

The Tabata scheme is highly taxing from a conditioning standpoint, but it’s easily scalable as well. “A new person, for instance, could go no chest to floor and 20 on, 20 off,” says Brockway.”

To purchase a TRX Suspension Trainer (and/or other training equipment), visit TRXTraining.com.