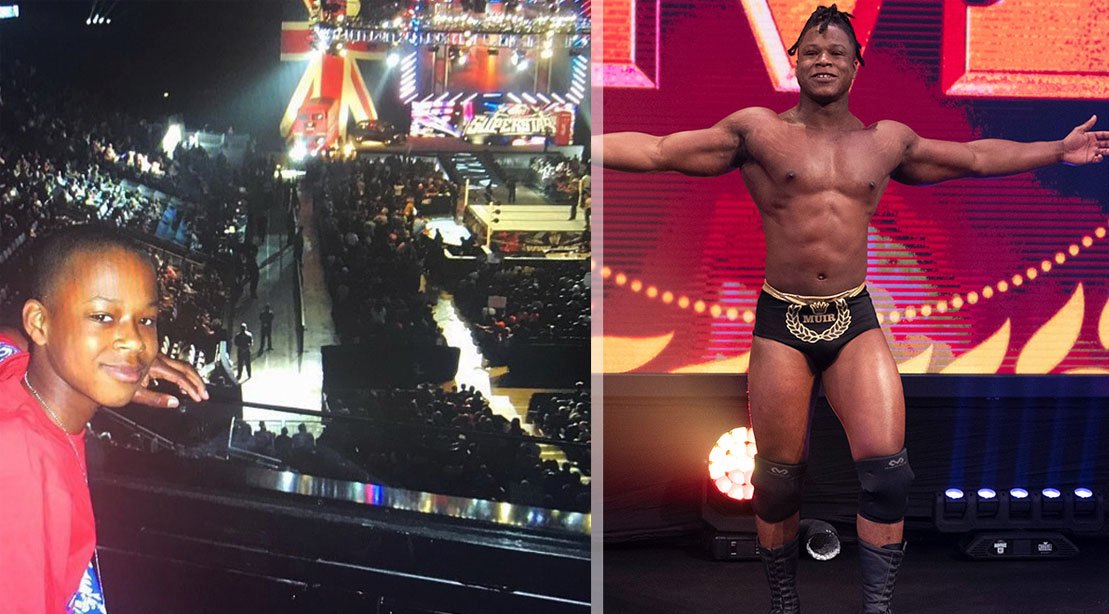 With their RAW, SmackDown, and NXT brands needing a constant influx of fresh pro wrestling talent, WWE’s roster runs into the hundreds. The worldwide leader in sports entertainment scours the globe, constantly seeking the “next big thing” that will connect with audiences in the same way as WWE legends like Hulk Hogan, “Stone Cold” Steve Austin, The Rock, and John Cena, but with so many rookies like Levi Muir vying for WWE’s attention, getting noticed can bring its own challenges.

For Muir, becoming a pro wrestler was his only goal, and he went all-in to make sure that he landed on WWE’s radar by following an inspirational plan that serves as an excellent example for anyone out there wishing to run the ropes. The world-class athlete from Tooting, London, explains the steps he took to become one of WWE’s most exciting young signings.

It’s true to say that WWE’s locker room is full of men and women of different sizes, but for the most part, WWE is a television product and as such, it’s wrestlers need to look good on screen. Levi grew up watching icons such as John Cena, and he knew that commanding the spotlight would require hard work in the gym.

“I first started watching WWE in 2006,” says Muir. “My favorite superstars at the time were John Cena and Jeff Hardy. Later, I started to appreciate people like Rey Mysterio and The Miz. Cena is a big boy — he has muscles on muscles — so that stood out to me as a kid. I realized that a big part of getting to WWE is looking good, and that’s where my love of bodybuilding came from so that I could commit to this journey properly.”

As a self-professed hard-gainer, Muir has to work hard to consume calories, making sure to refuel at least every three hours. He’s been able to take his naturally trim physique and add muscle to his frame, to achieve a great look for the cameras.

Learn from the best

There is no shortage of retired pro wrestlers who will take your money to school you in the art of pro wrestling but, as Muir soon found out, it’s important to seek out the best coach to help you meet your goals, even if that means moving halfway across the world.

“I went to my first training class when I was 14,” says Muir. “It was just in the back of a pub. My mother came down with me and at the end of the class they had everyone take kicks from all the other wrestlers as an ‘initiation.’ She never let me go back there again. After that, when I was 15, I found (the well-respected) Progress Wrestling School (in London) and I committed myself fully. Then, the following year I went [to Calgary, CA] to train with Lance Storm.”

Lance’s Storm Academy ran from 2005-2019 and has trained the “who’s who” of today’s crop of grapplers, including Dominik Mysterio, Gail Kim, Franky Monet, Brian Pillman Jr., and so many more. While the Storm Academy was not an “official” WWE training center, it was a good choice because of Storm’s career as a respected pro wrestler and his WWE connections.

Be prepared to go all-in

Muir was still in school while jumping backward and forward between The Storm Academy and Olympic trials. The flights and accommodations took a heavy toll on his wallet, so he made the decision to find work in order to fund his development. “I got two jobs, and I just worked them for eight months,” says Muir. “It was work, train, work, and that was it. I worked in a day care center with babies and I worked in a gym too, cleaning the gym and doing shift work. It was a gamble, and a risk, but hopefully I’m starting to see that pay-off now. It worked out in the end.”

“I figured out that there were two routes I could take to try and get to WWE,” says Muir. “One route is the independent wrestling route, and the other is the ‘athlete’ route. When you watch the tryouts in the WWE Performance Center, there are NFL guys, Ex-basketball guys, powerlifters, all guys that had a pedigree from a different sport. I knew that I needed a sport behind me, to legitimize myself [to the scouts], so I started powerlifting and did really well. I won a GB competition, and I got contacted by the GB Olympic team.”

Team GB was running a program called “Discover Your Goals” and put Muir through his paces in tryouts. He was offered a place on the program, but since he was already deep into his pro wrestling training with Storm, Muir declined the offer with his goal of becoming a well-rounded and respected athlete now fulfilled.

In the ‘80s, a beefy body seemed like the only qualification needed to find your place on the card, but these days pro wrestlers are expected to be conditioned athletes who in addition to looking great, can also hang with smaller and more agile challengers. Muir is a huge fan of box jumping — he has a personal best vertical jump of 59 inches. He also has an impressive backward-facing box jump.

“I love plyometrics. I think that type of training is so beneficial for pro wrestling,” he says. “I think it shows in the ring, it creates a difference in movement, and I think it’s something that every wrestler should do. It makes sense because you use the same style in the ring, whether it’s jumping up and down or changing direction, so why not train that way outside of the ring to begin with?”

Levi Muir is a keen powerlifter and loves to lift heavy, but he’s tapered these sessions off to accommodate his busy wrestling schedule and relieve stress on his joints, helping to prevent any injuries that could force him to miss matches. “I don’t stay away from it completely,” says Muir. “But I do try to concentrate on the bodybuilding style of training, along with those plyometrics.”

Levi Muir built his connections with WWE higher-ups and was told to keep working hard. He plied his trade on the independent scene for almost three years before earning his WWE contract. And, since the life of a WWE superstar is as much mental as it is physical, NXT UK’s William Regal couldn’t resist testing Muir’s metal before a contract was offered.

“I had a three-day tryout with WWE in 2019, and it was the toughest thing I’ve ever done,” says Muir. “We had four pro athletes leave within 20 minutes of starting the tryout. There were so many drills, and so many burpees. Then I was asked to stay and train with the WWE NXT UK roster for the week as well. I was only 22, and I had grown up watching Noam Dar on Monday Night RAW and now I’m training with him. Wow!

“At the end of the week, William Regal came up to me and he said that he wanted me to have a match in front of the wrestlers in attendance in London’s WWE Performance Center. But right before the match, he told me that they weren’t going to sign me [laughs]. He said that they were going to bring me in part-time, and see how I did — kind of like probation. So, then I went and wrestled the match with all this going on in my head, had the match and afterward, he told me that they were really going to sign me and that I did well. And that’s how it all panned out in the end.”

Having pushed himself through mental and physical limits, Muir fully intends to prove that William Regal, and the WWE were right to bring him into the fold.

“My immediate goal is to take advantage because I’ve got people around me that are so much more experienced than me,” Muir says. “I keep my mouth shut and my ears open. My long-term goal is to help push NXT UK as a global brand. We have the best roster in the world. My long-term goal is the world title and nothing less. I want to be the first black NXT UK champion. There’s a famous quote in which Triple H said that if you are not here to by champion, then why are you here?”

Sculpt a WWE-worthy physique with these workouts and tips.