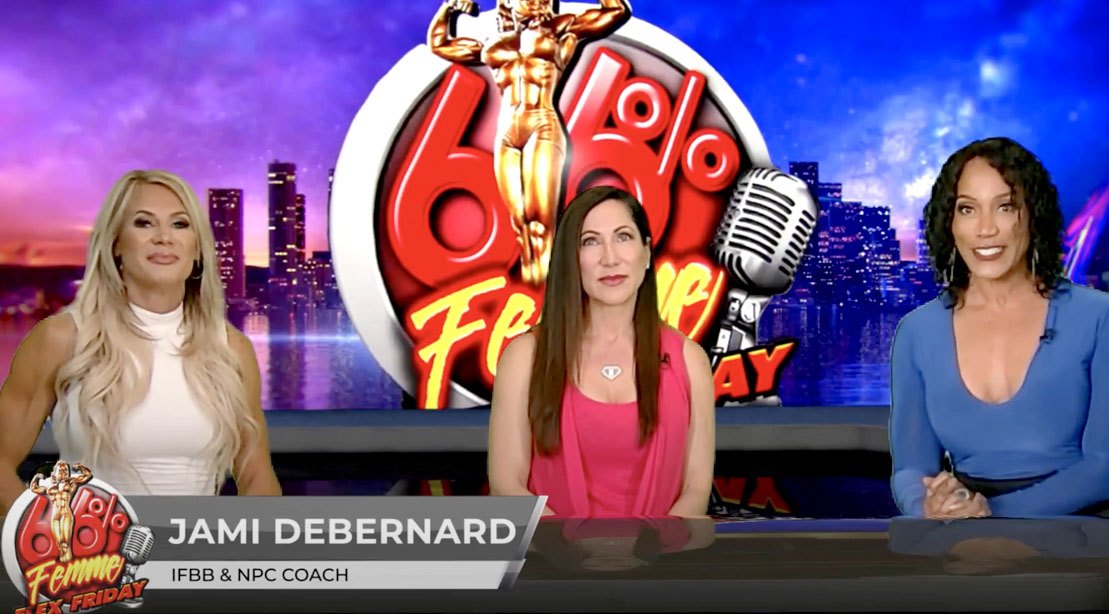 The phrase “age is just a number” gets used a lot, but it has been proven to be true in many instances. If you need evidence, look no further than Jami Debernard. She works as a coach, but she has competed onstage at the highest level. She not only turned pro at 40 years old, but she competed at the Olympia twice afterward. That experience serves as inspiration and credibility in her current profession.

Jami Debernard joined Femme Flex Friday host Lenda Murray and guest co-host Whitney Jones on this week’s episode to talk about her career and share her words of wisdom for competitors, including that you don’t have to be in your 20s to make the jump into physique sports.

“It was one of those things where it was just something that I was so passionate about, and I fell in love with weightlifting and the idea of being able to change your body so dramatically,” she said. “It’s like a piece of art to sculpt, to be able to do that to me was so exciting, and then to get up there and show that.”

Ultimately, she found another way to contribute to the sport in the form of coaching. She tells Jones and Murray that her current profession serves as a way of giving back, but her business “Fit Body Fusion” grew into something much bigger over the 10 years since she started.

“I almost kind of fell into it a little bit. Because of my corporate background, that ended up launching into now, I think we’ve got somewhere around 1,300 athletes on the team and 25 coaches.”

Debernard also feels it is important to dispel a lot of the myths about training and competing that have been spread throughout fitness circles. Murray started with what may be the biggest one of all; strength training will bulk you up. Debernard was quick to address this one.

“No, definitely not, and there are so many benefits to strength training. For myself now in my 50s, I feel so lucky that I found this so early on. It’s allowed me to stay a little bit leaner, to stay healthier, and more functional in my body,” she explained. “There are so many benefits to weight lifting, and it takes a lot to build muscle, so many years and lots of hard work. It’s not like something that you’re going to go in the gym, look at some weights, and all of a sudden (flexes) boom. I wish it were that easy.”

Another myth that they cover is that a lot of cardio is the key to fat loss. Debernard shared that she actually uses an approach that would be considered the exact opposite.

“I do my best to keep cardio pretty minimal,” she says. “I mean certainly we want heart health and things like that, so doing some is great. But building muscle is really going to be what increases the metabolism. It gives you the long term benefits. So cardio is a component, but it shouldn’t be what you’re leaning on.”

The co-hosts and guest also cover include the myth of spot reduction, how her business allows her coaches to focus on coaching, and several other topics. Catch the full episode and every episode of Femme Flex Friday over at wingsofstrength.net.