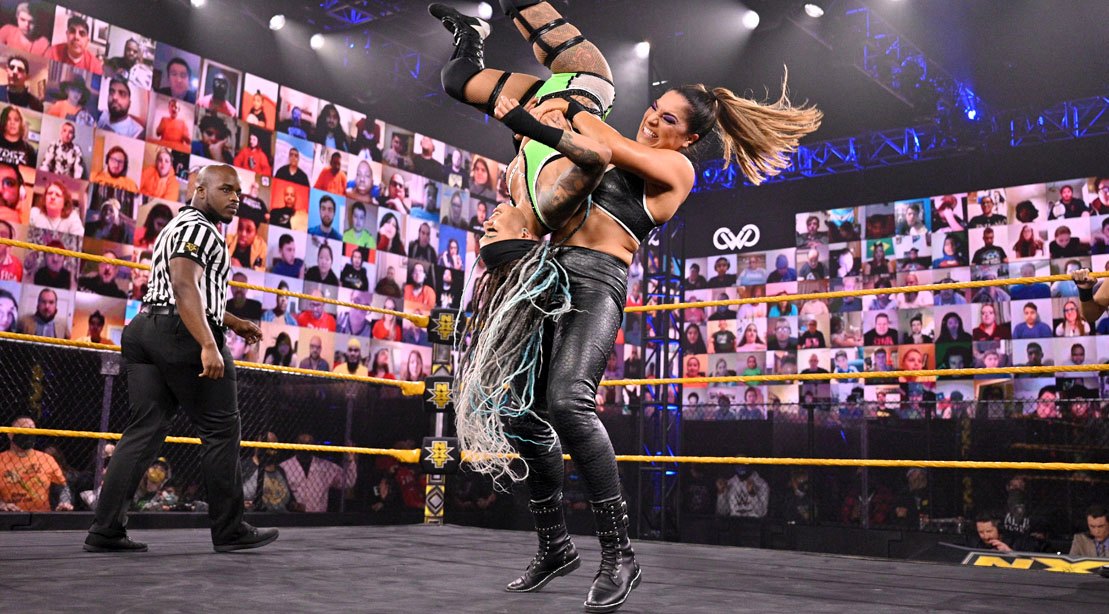 It’s official: Raquel Gonzalez will take on Io Shirai, the NXT World Champion, in the main event of NXT TakeOver: Stand and Deliver, on Wednesday, April 7 on the USA Network. Night two airs the following night, exclusively on Peacock.

For Gonzalez, Shirai, and the NXT roster, the opportunity to showcase their talents to the WWE Universe during the pro wrestling juggernaut’s biggest week can’t be understated. WWE reported last year’s WrestleMania Week viewership at 967 million views across all platforms.

The opportunity hasn’t been lost on Gonzalez, the 6’ former DII basketball player at Texas A&M Kingsville. Since making her NXT debut at last year’s TakeOver in Portland, Gonzalez has gotten leaner, stronger, quicker, all in an effort to prove she’s worthy to carry the NXT torch.

“Physically, I’m more agile and I run a lot more,” she explains. “My endurance is higher, my jumping is higher. A lot of stuff has just become a lot easier for me.”

She adds: “Io, you’re brave girl, but, I don’t think you’re ready for a competitor like me. The last powerhouse she faced was Rhea Ripley — and that was months ago. I know she is the best in the world, and to be the best you have to beat the best. So I’m coming in with the most excited and anticipated mindset that I can.”

In the gym, with the help of former strongman and current WWE Superstar Braun Strowman, Gonzalez switched from a full-body CrossFit-type routine to a more traditional bodybuilding training style. She’s also added plenty of yoga and massage therapy to aid flexibility and recovery efforts.

“I’ve been doing a lot of movements that I know I’m going to use in the ring when it comes to throwing around people,” Gonzalez says. “And Io is probably half my size, so I know I’ll be throwing her around a lot, for sure.”

With less than three weeks till the big match, Gonzalez says her preparation credits the confidence to her recent change in diet that has her feeling at the top of her game. She’s begun counting her macros more, switching to a diet of whole foods consisting mainly of lean meat, rice, red potatoes and egg whites, as well as drinking at least a gallon of water a day. She’s gone from a high of 200 pounds to hovering around the 180- to 185-pound mark these days.

Before the two battle for the title at Stand and Deliver, Gonzalez and tag-team partner Dakota Kai, who became WWE NXT’s first women’s tag-team champions after winning February’s Dusty Rhodes Tag Team Classic at NXT TakeOver: Vengeance Day, will get one more up-close-and-personal showdown with Shirai, who will partner with Zoey Stark in a tag-team match on this upcoming week’s WWE NXT.

“This is going to kind of be my checking out the scene type of thing,” Gonzalez says. “Mentally for me, this is going to be an opportunity for me to really fill up my arsenal with what I need to bring when it does come time for that NXT Women’s Championship match.”

Prev post
IFIT is Bringing Mt. Everest to Your Home Workout
Next post
Steve Weinberger and Sandy Williamson Talk About the Evolution of Women’s Bodybuilding