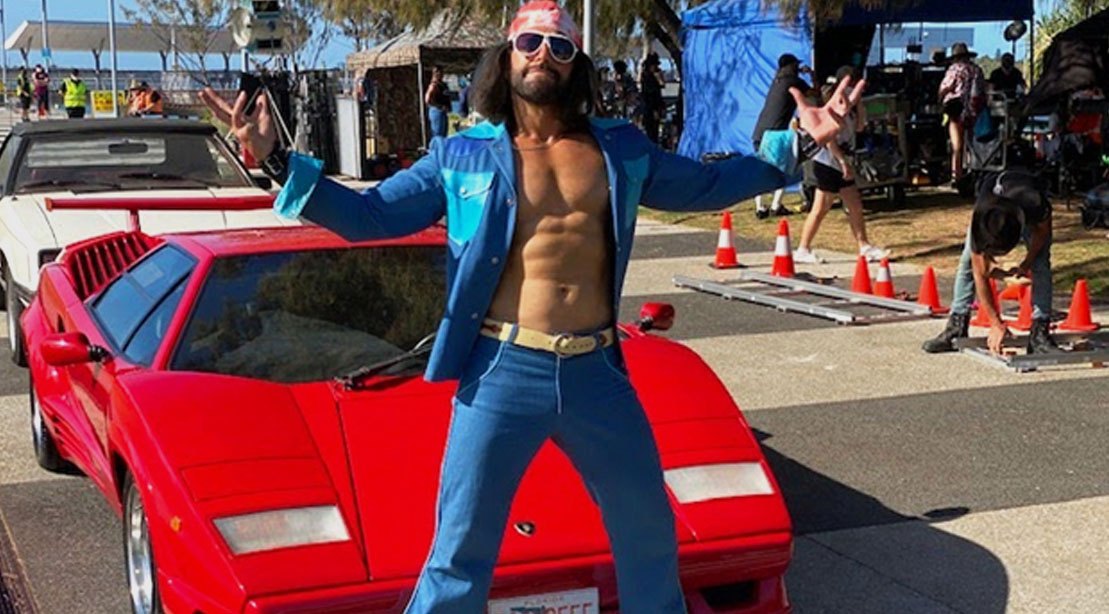 How Kevin Makely got ‘Savage’ for ‘Young Rock’

It’s official: NBC’s Young Rock is a hit. More than five million viewers tuned in to see the sitcom premiere, which is currently ‘Certified Fresh’ on Rotten Tomatoes and is loosely based around the life lessons of a young Dwayne Johnson. No doubt, a huge part of the show’s success is owed to the genius casting of wrestling legends such as Rocky Johnson (played by Joseph Lee Anderson), the Iron Sheik (Brett Azar), Andre The Giant (Matthew Willig), and the Junk Yard Dog (Nate Jackson).

In Episode 3, Kevin Makely joins this stellar lineup, making his first appearance as one of the all-time WWE greatests, donning the shades and bandana to portray “Macho Man” Randy Savage. It didn’t take long to learn that Makely, who also stars in Netflix’s “Badland,” and whose #backyardbeast sessions can be found on his Instagram page, has a serious fitness pedigree.

Is it true that your interest in bodybuilding was inspired by watching Sylvester Stallone on the big screen?

I was raised by a single mother and I only had an older brother. My mother worked at least three jobs at a time, so I didn’t have any male influences, but the one thing we did every weekend was go to the movies.

As I got a little older, I would start to see these guys like Rocky and Rambo, and they spoke to me. So, Sylvester Stallone was my father figure when I was a kid, but he doesn’t know [laughs]. I wanted to be a hero like Rambo, and a fighter like Rocky. I wanted all of that. It bled into Arnold Schwarzenegger and I got into bodybuilding and martial arts.

You had great success in bodybuilding and won several natural events. What do you remember about your first competition back in 1997?

It was an NBI (Natural Bodybuilding Incorporated) show. Working out at the gym and eating right was my lifestyle, since I was 14. I didn’t even know I had abs until one day, I shaved and found them (laughs). At the time it wasn’t all about definition, I just wanted muscle. But one day I was working out and my good friend suggested that I compete. So, I did my research on the nutrition aspect and I went for it, and won in the overall competition. I built quality muscle with a very strict routine and good technique.

What does your approach to nutrition look like these days?

It’s all about intermittent fasting for me. If I knew then what I know now, I probably would have won even more bodybuilding awards. It’s all about crushing those insulin levels. I’m an NASM certified personal trainer. I’ve been teaching biomechanics and training, I’m a World Kickboxing Association-certified trainer. I was the top trainer at Crunch Fitness, and was a spokesman for Bally Fitness for a long time. I worked out with a partner who was fasting, and I thought he was out of his mind, so I started doing my own research and gave it a go. I deadlifted more weight on a fast than I had lifted in 10 years. Boy, the results.

Your physique in “Young Rock” is very close to the Macho Man’s, how did you prepare for that?

A guy in his 40s, playing ‘Macho Man’ Randy Savage in his 30s, how do you do that? We filmed in Brisbane, and while in quarantine I got hooked on resistance bands. I put them in all of my workouts. I always say that bruises heal, but film is forever, so you do your own stunts and take your lumps. I was very strict and super keto. No sugar and as little carbohydrates as possible. My only cheat was peanut butter or almond butter. I ate real food, didn’t really supplement with protein shakes. I love to eat, so when I am in my fasting window I just eat. It was nice in Brisbane because we got to work out in a gym with no masks.

How familiar with the Macho Man were you before you took the role?

He was my favorite wrestler of all time. The Ultimate Warrior was a specimen and he blew my mind, but Macho Man was my guy. I’ve been him for Halloween many times!

It must have been a dream come true to play Macho in Young Rock, how did that opportunity arise?

I got an audition, and the invite was very cryptic. I didn’t really know anything about it, all the names were changed, but they wanted someone to play the Macho Man. So, the first instinct is to do everything with his intensity, but I decided to portray Randall Poffo, and how he might have been when the cameras weren’t rolling. I already knew all of his promos like “cream of the crop” and “Ooh Yeah,” and everything else that he’s ever done, so I made up a version of what I thought was more like when he wasn’t on camera, but I still wanted it to be recognizable, just a toned-down version.

I met with Jeff Chang, who is one of the shows creators and he said, “I just want you to know that we saw so many tapes for Macho Man, then we saw your tape and that was it. You were him. You were it.” Dwayne Johnson saw the tape and I got the gig. I was like, Wow, Dwayne Johnson just watched my video! You even get to do Macho’s famous flying elbow from the top rope! All the wrestlers did their own stunts, it was fantastic. Chavo Guerrero Jr, who is a wrestling legend taught us, and I have to say that wrestlers take lumps and get hurt. Some of that stuff is not fake! Anyone that doesn’t respect wrestling needs to get their head checked. I’m flying, I’m weightless, people [in the crowd] are screaming, I literally came so close to elbowing the camera. It made for a great shot. I’m still excited just telling you about it.

Did you manage to get any feedback from The Rock during the project?

I read that Randy Savage was a big influence on The Rock. I did get feedback that he thought [my portrayal] was great. This is Dwayne Johnson telling his story, so allowing me to portray one of my idols and trusting me to do the job is one of the highest honors, it’s unbelievable.

There are some pretty large boots to fill in the casting of “Young Rock.”

Prev post
These 20-Minute HIIT Workouts Will Keep Your Fitness (and Ego) in Check
Next post
BodyFit: Plans For Gaining Strength