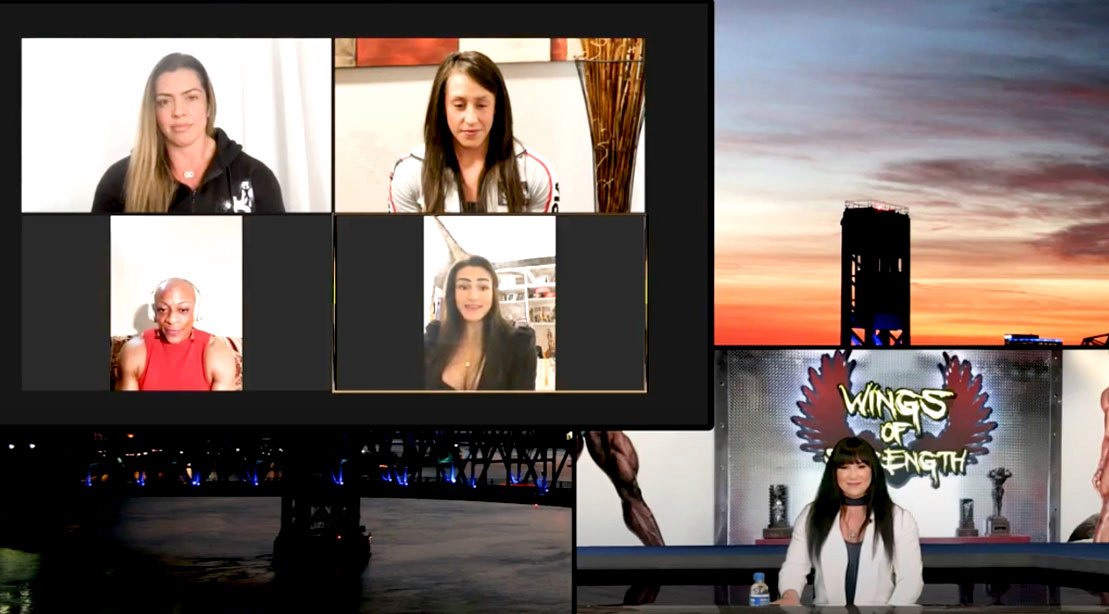 This week’s episode of Femme Flex Friday features some of the elite stars of the IFBB Pro League’s Women’s Physique division. Host Alina Popa was joined by 2020 Olympia Champion Sarah Villegas, third-place finisher Natalia Coelho, fourth-place finisher Barbara Menage, and Ivie Rhein, who finished fifth on the Olympia stage. These athletes held nothing back and offered a lot of insight into their 2020 Olympia experience.

Training for 2020 Olympia During the Pandemic

Villegas: “My husband and I actually own a gym, so for us training really wasn’t that interrupted because we had a facility that we own. And since we didn’t have the traffic that we would normally have, training was actually better on some days.”

Coelho: “It was not easy for me because I didn’t have a gym or anything like that. Everywhere was closed. I was fortunate that I found a place that I could go. It was a private gym. It was about two hours from my house, but I was making the trip every day, sneaking in, getting my training in. We have to find a way to get things done, no matter what.”

Rhein: I was fortunate that we had a gym at home. We started setting it up when the lockdown began because I was supposed to do a show in May, and I continued my prep. It was the most challenging thing with shows getting canceled or rescheduled. For me, the challenge wasn’t with training, but it was not knowing when the shows would be.”

Menage: “If the Mr. Olympia was in Las Vegas, I don’t know if it would’ve been possible for me to make it. So when I heard that it was moving to Orlando, it was a very good thing for me.”

Villegas: “That [winning] obviously, that helps. I thought it was great. When I heard a few weeks out that it was moving to Orlando, I was in panic mode. For me, it was little challenging mentally for training, not knowing exactly when it was going to be. So when they said ‘here is the dates, here is the place,” there was a calm, and then there was an anxiety when they moved it again. But I think it turned out really well. I personally really liked having everything in one venue. It helps to win and get first place too.”

Coelho: “I loved it, especially because I live in Orlando. So it was a little easier for me. To go through everything like that [changing locations], in four weeks. I was impressed. The stage was beautiful, and everything was so well organized, backstage as well.”

Rhein: “Honestly, for me, it was like Natalia said. It was much easier. No flights, no traveling, because I live here in Orlando. Like everyone has said, everything was in one place, there were more attractions for everybody that come to watch the show, to see us, I think it was amazing.”

“Obviously I’m happy that I won. I actually don’t think it was an upset. I would take it a step further. There were some media outlets that were going further than just having her as the favorite, even unofficially declaring her the winner. I’m saying when I’m training for a show that I’m going in to win, and I won this year. So it was a great feeling. I’m very, very happy with the outcome, and I’m very excited.”

Other topics that the four competitors discussed included Shanique Grant being considered such a strong favorite, Menage’s meteoric rise from amateur to fourth place at the Olympia in less than three months, Villegas’ responsibility as champion, their 2021 goals, and more.