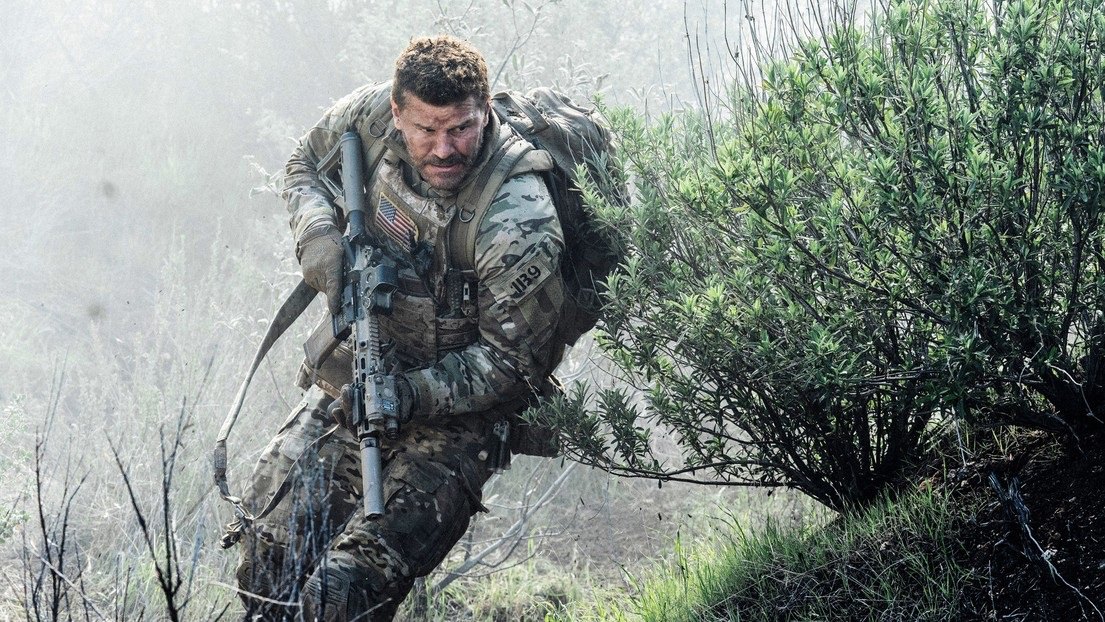 David Boreanaz knew that when he signed on to lead the CBS military drama SEAL Team, he was also signing up to spend some serious time in the gym. The show follows Bravo Team, an elite sub-unit of SEAL Team Six, as they train for and execute dangerous missions all over the world. That’s not the kind of group you get to lead by skipping workouts.

“The kind of person that becomes a Tier 1 operator has tremendous drive,” Boreanaz told Men’s Journal.

He has portrayed team commander Jason Hayes for three seasons. On the surface level, the character is a highly decorated military stud, but the real story is much more complicated. He also wrestles with the emotional and physical toll from his service—this season more than ever before.

Meet The Navy SEAL Who Turns Actors Into Assassins

The biggest asset Boreanaz has is the series creative team, which is stacked with former special forces members. They offer a wealth of insight on the mental and physical aspects of the job, from getting through BUD/S, to deployments, to coping with the aftermath.

“I can’t explain how crucial they have been to the character,” Boreanaz said. “During these operations they can’t go below 100 percent, they are always going and burning. I get so much out of being around those guys, and it pushes me to work harder.”

One person who can attest to that is Boreanaz’s trainer Roy Paras, founder of EPX Training, who has spent the past year keeping the actor dialed in and fit for duty.

“These Navy SEAL guys are all true badasses, and there are no shortcuts to looking like a badass,” said Paras. “You have to train that way.”

So he designed a program to keep Boreanaz healthy and shred him up, too.

Boreanaz reports to Paras six days a week. Since the show films so many days out of the year, there’s a trailer on set filled with gym equipment where the whole cast of SEAL Team can get their pump on. On days when they aren’t filming, Boreanaz drives to EPX, but no matter where they go, the program stays the same.

Their workouts are complete and multitiered, kicking off with a little cardio to get the heart pumping and the limbs warmed up. Before they exercise further, Paras puts Boreanaz through soft tissue work on the table, to identify any potential problem areas.

“Doing that kind of prep work is just as important as any other part of the session,” Paras said. “This is all about the long game, and whether you are out in the field or on the lot. You can’t do your job if you are injured.”

Boreanaz is no stranger to injury. He suffered a few over the course of previous seasons, and even went through platelet-rich plasma therapy—injections that stimulate the body’s natural healing functions—to bounce back after a substantial knee trauma. The show’s intense action scenes also placed a significant toll on his lower back, legs, and joints. He admits to being less disciplined in his past training, but now with Paras they have found a way to push it hard without those long-lasting consequences.

How John Krasinski Packed on Muscle for ‘Jack Ryan’ Season 2

That’s good, because the rest of the SEAL Team cast are younger guys who all like to get after it. Boreanaz not only plays their team commander, but he also serves as an executive producer and director on the show. For him, it’s not just about keeping up, it’s about leading. For example, he directed an episode that involves the group hustling up a hill while loaded down with packs.

“The scene started off with a rope exit out of the chopper and then we did an ascent up the side of this hill,” said Boreanaz. “I could probably have cut a few minutes in, but I didn’t want to. I just kept us going, harder and harder up the hill, with rocks falling all around us. By the time we were done, we were sucking wind. The guys didn’t love it, but it looked awesome.”

This season the cast traveled to Serbia, where they could be spotted jumping out of cars and chasing bad guys down alleyways with their full kits on.

“I really enjoy getting into the elements like that,” said Boreanaz. “Getting to run around Belgrade in a physical space rather than on a soundstage. Everything that we do is to serve the story of these guys better. That is why we put in the work.”

A Marine’s 6-Step Plan to Getting Mentally Tough

A Day in SEAL Team Training

Boreanaz stands at 6’1” with big shoulders, and he bulks up quickly. During his research, he noticed that a number of SEAL operators were wiry with great flexibility and athletic builds.

“On occasion they have to smash down doors,” says Boreanaz. “But there are also a lot of controlled movements, sitting low and crawling for their covert missions. All with their packs on.”

So Paras designed a high rep count program that would keep him lean and mean.

Complete 2 rounds of this circuit with no rest in between.

Complete 4 rounds of this circuit with a short rest in between.

Complete 3 rounds of this circuit, moving weight quickly with a short rest in between.

Complete 3 rounds of this circuit with a short rest in between.

Get more info on Roy Paras at EXP Training.