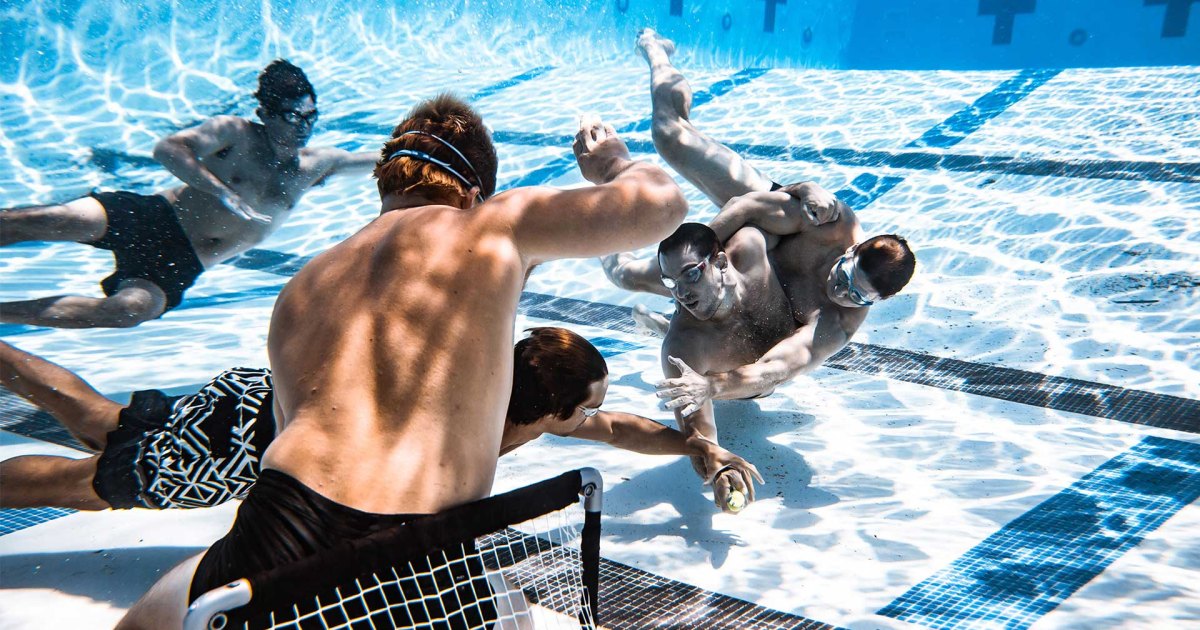 What do you call a melee of big-wave surfers, NFL stars, pro swimmers, and armed forces vets vying for control of a foam toy at the bottom of a pool? Underwater torpedo.

Prime Hall is in the deep end, keeping a death grip on an oblong kiddie pool toy as two pro football players grab at his ankles and an MMA fighter body-locks his waist. Hall shakes them off, backflips, and launches the toy through the small goal on the bottom of the pool—all on a single breath. A former Marine Corps officer, Hall is the founder of the Underwater Torpedo League, the pro arm of a sport that’s akin to submerged rugby (see rules below). “It can look like a free-for-all,” Hall says. “But it is controlled chaos.”

Swimming Workouts: The 5 Best Swimming Drills to Get Jacked in the Pool

Underwater torpedo requires conditioning, endurance, and calm—which is why it’s become a preferred way for pro athletes to amplify their fitness. Here’s how to get in on the action.

Workout in the Water

The Underwater Torpedo League—currently eight teams large—is based on the West Coast, but ad hoc games are popping up across the U.S. Newbies will need high baseline fitness, including sport-specific prep. But this demanding pool routine, created by Hall, is effective for anyone looking to level up their fitness. Try it once a week, and unless you’re a strong swimmer, do it under the watchful eye of a lifeguard.

A Killer Strength Workout—in the Pool

For Explosive Power: Burpee Bottom Out

Stand at the edge of pool’s deep end. Step into water, body forming a straight line, to sink to bottom of pool. Land in a squat and touch hands to bottom. Push off hard through feet to propel to surface as quickly as possible. Climb out of pool and repeat for 9 reps. As you get stronger, add reps until you reach 20.

Jump into deep end, then paddle to side and grip pool edge. Maintaining grip, take a deep breath, and go underwater, locking out arms so body is parallel to pool wall. In a swift movement, pull chin up to the ledge, then hoist torso out of water like you’re getting out of the pool—hands on the pool deck, arms locked out, shoulders over hands, belly touching pool edge. Gently lower into the water for 1 rep. Repeat up to 30 reps total or until fatigued.

Drop a heavy (30 to 50 pound) dumbbell into deep end of the pool. Take a huge breath, inhaling through mouth, then continue to inhale through nose to open the diaphragm and fill entire chest. Step into water, toes pointed, sweeping arms above head to propel to bottom of pool, and grab dumbbell. Lean forward and walk along pool bottom for as long as you can (as shown). Release air little by little to extend time underwater, and drop dumbbell and surface when necessary. Rest up to 5 minutes and repeat. Start with 2 reps, building up to 4 reps. On the last rep, walk dumbbell to shallow end to remove from pool.

Rules in the Pool

Two teams of 11 play in a 14-foot-deep pool. Five players per team are allowed in the pool at a time. When the whistle blows, both teams vie for the torpedo that’s sunk in the middle of the pool. The object is to score through a small goal (about 18 by 24 inches) and inhibit the opposing team from doing just that. Surfacing while holding the torpedo incurs a penalty, so players must pass to a teammate before rising to the surface to catch a breath. Maneuvers like barrel rolls, front and back-flips, and pushing off of the pool walls help players evade defenders and advance the torpedo. Defensive players can tackle, pull, and grapple in an effort to wrest free the torpedo. However, kicking, punching, choking, and grabbing goggles or swimsuits are illegal. Substitutes stand on the pool ledge, ready to tap in for gassed teammates. There is no designated goalkeeper. The first team to score five goals in a match wins; games are the best of three matches.

Underwater Torpedo by the Numbers:

How to Improve VO2 Max: The Only 2 Workouts You Need