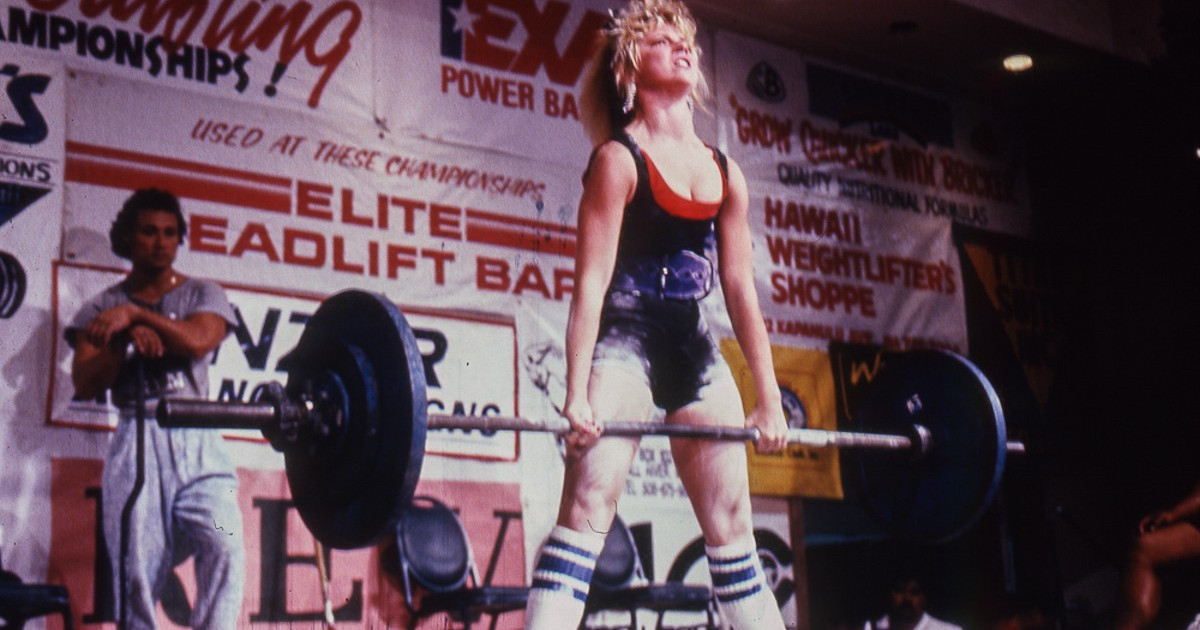 When you think of strong individuals, the first group that comes to mind is generally not teenage girls, even though nowadays they push the limits of their strength right along with the boys. But back in the day, girls in their teens were expected to excel in sports like gymnastics — not lifting heavy barbells.

Even so, there were strong women who broke the mold and paved the way for future female athletes to gain the respect and admiration they deserved. One such woman was Alphie Newman.

My introduction to powerlifting for girls came at the World Record Breakers Competition in Honolulu in 1989, where I was to cover the strongest men in the world for Muscle & Fitness. So early on in the meet, long before the bigger men were scheduled, I was unprepared — no lens on the camera and no film loaded — when blonde, 15-year-old Alphie took the stage. Her late father had been a weightlifter and had gotten her started early.

This was her second year in competition, and by the end of the meet she would be the proud holder of a total of eight world powerlifting records for her age and weight.

In addition to her athletic ability, Alphie was gorgeous and charismatic. She would complete a lift and then strike a bodybuilding pose to the delight and excitement of the audience.

In addition, Alphie was accomplished in other ways. She was also a trained dancer and gymnast — skills what would help her when she eventually got into fitness competition. In fact, Alphie often seemed not to walk across a room, but to dance.

A few years after I met her, Alphie moved from weightlifting to bodybuilding and won the NPC Teenage Bodybuilding Championship.  Afterward, she competed in fitness and became the first Ms. Galaxy right at the beginning of the fitness competition industry.

Being so athletic, attractive and accomplished, Alphie Newman was featured in a wide variety of magazines and magazine covers.

Her competitive career was sidetracked after an accident on a motor scooter sent her face-first into a parked car. Thankfully, she eventually recovered almost completely except for some ongoing dental problems. She would have gladly continued with the training and the workouts, but as her body matured, she found it increasingly difficult to stick to the demands of the very strict diet required and began having some thyroid problems, mostly caused by having dieted too strictly for too long at such a young age.

Instead of continuing to compete, Alphie decided to focus on personal training and, more lately, working as a massage therapist.

Alphie had her period of fame before the Internet and social networking. Otherwise, she likely would have become a very important social influencer for young women aspiring to become strength athletes or physique competitors. As it was, she received a lot of mail, mostly from young girls with aspirations to follow in her footsteps, to develop their muscles with weight training, become bodybuilders, weightlifters or get into the fitness industry.

With so many young women out there nowadays who enter muscle competition without the stigmas formerly attached to doing to, it’s difficult to realize how special and unique Alphie was thirty years ago when she was one of the few doing what she did.

Alphie was amazing, and I’m glad I was there with a camera when she came on the scene, so I am now able to introduce a new audience to a fabulous female of such significant and admirable achievements.